Practice What You Preach

As I left my town's carnival tonight and walked back to my car with my family, a man stopped me.  Clearly, he was trying to sell me on something- he had a clipboard in one hand and a few post cards 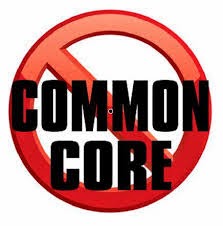 in another that I knew I would grab and throw into the closest garbage can I could find.  As I glanced at his signature-filled clipboard quickly trying to decide if I would stay or go, I noticed his tee-shirt.    The shirt was black and on the back was white letters inside a no-smoking sign kind of visual.  Inside the red circle with a  large slash through the middle were the words COMMON CORE.

Hmm, I thought. Let's hear what he has to say.  So I did.  He bragged about his candidate who needs a certain amount of signatures to get on the ballot. Not a Democrat.  Not a Republican.  One of the early opposers of the Common Core.  Starting a revolution against the Common Core in Connecticut and will probably get it abolished in CT.... yadda, yadda, yadda.  "So, Ma'am, will you sign our petition to get this candidate on the ballot?"

Disregarding my distaste for the term, Ma'am, (I clearly still look 21), I think I surprised the man with my response.

Quickly the man's face hardened.  "You know you're in the 10% of the population," he quickly chided.

Frankly, I didn't know that.  If I had been prepared for a debate, which I was not, I might have questioned his statistic.  In Connecticut? In the nation?  Of parents?  Of educators?  10% of whom?

I didn't.  Instead, I offered a brief dialogue about how I don't believe that it's the standards that are the enemy, but rather the state testing and teacher evaluation being linked to it.  I mentioned my thinking that it's the misinterpretation about curriculum, instruction and assessment of these standards, by people like David Coleman and school leaders around this country, that misrepresent the CCSS document. Parents and policymakers, who are jumping on the anti-CCSS bandwagon, too, I believe are misinformed.  So I asked, "What is it about the CCSS that you don't like?"

My question stopped him in his tracks, and his answer made me realize at that moment that he was one of the thousands of anti-CCSS people who were making judgement without studying the facts, or even the document itself.

"I don't believe that the federal government should control the curriculum," was his answer.

People and parents, everywhere, you may have been misinformed.  I believe people everywhere need to think through the following points about the CCSS to inform your thinking before signing your name to petitions in any parking lot:

2.  Standards are not new.  Standards have been in every state for many, many years.  Connected to those standards are state tests.  Yes, the mandates have changed about when and how often those state tests are delivered, but a set of standards is not new.  A set of standards that 40 states align to?  Yes, that's new.  But I think you'd be hard pressed to find someone who doesn't believe that kids in North Carolina shouldn't be held to the same standard as a student in California and Connecticut.  They are going into the same workforce, the same college pool, and the same world, right?

3.  There are flaws with any rollout of something new.  Within the next few years, the CCSS will be revised, as all new documents are.  How many amendments have been added to the Declaration of Independence, for example?  As we know more, we do better.  I believe this document is flawed.  But I don't believe that we should throw the baby out with the bathwater, so to speak.  There are powerful, real issues with the CCSS and they will need to be revised (K-3 standards, to name a few).  But, I believe schools should be setting high standards for students to think critically to become lifelong learners and productive citizens. I believe students need the habits of mind to apply knowledge in their own lives to change our future.

4.  The CCSS has made teaching better if the district has manipulated the standards for what they are, not for what they are not.  I wrote a blog post last year about why I embrace the CCSS.  I've contemplated my thinking on it over this past year after the strong movement against the CCSS, but I remain steady that the CCSS is not the enemy.  The people who misinterpret it are.

Dear Future Governor candidate that I wouldn't sign your petition today, what are you against?


6.  The CCSS requires all teachers to be teachers of literacy.  Instead of ELA teachers being in complete control of children's reading, writing, speaking and listening, the CCSS holds ALL teachers accountable for literacy.  How does a scientist think about content in Science and write about it?  How does a historian read primary documents and make judgement about them?  The CCSS has started conversations about transferring skills across the day so students are thinking about literacy in new, authentic ways.  Yes.  We want students to transfer their skills across disciplines to apply their learning in relevant ways.

7.  The standardized test is not the CCSS.  There are issues with SBAC and PARCC, no doubt.  But
honestly, it's not a bad test--- at least based on the pilot that I've seen these past two years.  If you didn't want your child taking a bad test, they should have been opting out of the Connecticut Mastery Test that asked kids to make up evidence to support their point in persuasive essays.  The CMT editing and revising was the worst assessment I've ever seen and when we questioned it, we were told that we shouldn't be looking at the test (by the state).  No one opted out of that.  Is that real world?  Does that prepare them, or teach them, how to write? How to think?  Nope.  Will revisions need to be made to the new tests? Yes.  Is it ridiculously long?  Yes.  Do schools need support with the technology? You betcha.  But the testing isn't the CCSS.  The testing is the tool to measure understanding of the CCSS.  They're different.  Let's not confuse the two.

I'll concede that the CCSS have been misrepresented in schools.  Many believe the CCSS document is curriculum and they have butchered best practice to "align to standards."  Others have grabbed hold of it and mandated textbooks based on the Publisher's Criteria (which is ironic, by the way, because the document itself mentions that it cannot say how teachers should teach and yet the authors (Pimentel and Coleman) have made a lot of money doing just that).  Please don't confuse the standards to be curricula.  In fact, the standards themselves publish the following statement under the heading "What the Standards Are Not:"


The Standards define what all students are expected to know and be able to do, not how teachers should teach. For instance, the use of play with young children is not specified by the Standards, but it is welcome as a valuable activity in its own right and as a way to help students meet the expectations in this document. Furthermore, while the Standards make references to some particular forms of content, including mythology, foundational U.S. documents, and Shakespeare, they do not—indeed, cannot—enumerate all or even most of the content that students should learn. The Standards must therefore be complemented by a well-developed, content-rich curriculum consistent with the expectations laid out in this document.  (CCSS, 2010)

The CCSS may transform schools.  It may.  It may force districts to think about instructional practices and methods.  It may bring up uncomfortable conversations in the parking lot of a carnival.  It may cause parents to think deeply about standardized tests and teacher evaluation plans.  It may force teachers and administrators to work together, strategically and systemically, to plan curriculum.  It may inspire 5,000 teachers to attend professional development at Teachers College (TCRWP) in New York City this summer over their own vacation to learn from each other and continue professional dialogues.  Maybe it will help students learn.  I say Bravo.  Let's have those hard conversations in the parking lot, in our Board meetings, PTA meetings, cocktail parties and in our schools.  Let's stay informed.  Because frankly, it's our future.

Yes, it is up to the local government and schools to push back and do the right thing.  The CCSS is not a curriculum. It's a set of standards.  Teachers should not be "graded" based on the standardized tests that are connected to very rigorous standards.  But that's not the CCSS.  Parents and people everywhere, let's not confuse the issues.  Let's fight the right fight.

No, sir. I won't sign your petition.  I don't even remember your candidate's name.  I wish I had jotted it down so I know not to vote for you.  I don't want a governor who puts people out on the field with that image on the front and back of their shirt.  I want a governor who understands the CCSS and wants to support schools in their attempts to reach the high standards.  I want to vote for a Governor who supports teachers and schools to transform learning in ways that help students succeed. Because I think that's what our future needs.  We need Governors who "delineate and evaluate the argument and specific claims ... assessing whether the reasoning is sound and the evidence is relevant and sufficient;" and "recognize when irrelevant evidence is introduced" (CCSS, 2010).  Eighth graders can do it, and so should you, future Governor.   That's CCSS ELA Standard 8.8- Reading for Information: Integration of Knowledge and Ideas (8th standard in the 8th grade).

I just ask that you, parents, policymakers, citizens, follow Standard 8.8 before you make judgement.  Let's "recognize irrelevant evidence" and make decisions based on credible and relevant sources.  The guy wearing a black shirt with Common Core crossed out on it may or may not be the best person to give you your information, but let's teach kids how to question and think through the issues.  Let's practice what we preach and fight the right fight to set the right example for our children.

Sarah Broas
Student, Teacher, Learner, Wife, Mom, Friend, Daughter, Sister... I am a sixth through eighth grade literacy specialist, coach, mentor, and teacher. A student of literacy, I am an avid supporter of the TCRWP.